Four Steps to a Victory

In the second year of King Saul’s reign, 1 Samuel 13:5 states, “the Philistines gathered themselves together to fight with Israel.” The Philistines outnumbered Israel; they had 30000 chariots, 6000 horsemen, and a multitude gathered together on the shoreline. Israel had 3,000 men—in the beginning.

However, the Israelites were so scared, they hid behind rocks, thickets, and some fled to Jordan. Their numbers almost vanished, in a moment, because of fear. The 600 men who remained with King Saul and Jonathan were trembling; definitely not the mighty men one would hope for to fight for your freedom.

God’s posture for victory is not relaxing.

Your triumph in the battle you are fighting may be a result of great conflict and fighting the odds.

“And Jonathan said to the young man that bare his armour, Come, and let us go over unto the garrison of these uncircumcised: it may be that the Lord will work for us: for there is no restraint to the Lord to save by many or by few.” 1 Samuel 14:6.

Jonathan did not have a king’s position, because his father, King Saul, erred by offering a sacrifice to the Lord instead of obeying the Lord. Jonathan lost his inheritance—he could have given up, became bitter, and given in to the multitude that was before him.

Jonathan made a faith declaration. He proclaimed, “There is no restraint to the Lord.”

You have to say what you expect from the Lord. Regardless of the odds, declare God’s power.

“If they say thus unto us, Tarry until we come to you; then we will stand still in our place, and will not go up unto them. But if they say thus, Come up unto us; then we will go up: for the Lord hath delivered them into our hand: and this shall be a sign unto us.” 1 Samuel 14:9–10.

Jonathan and his armor bearer speak in the flesh what God can do in the Spirit.

If you are praying about a situation in your life whether it concerns a new job, a relationship, or confronting a difficult problem; seek confirmation. Like Jonathan, put yourself in a position that you cannot accomplish a task alone. Empty yourself out before the Lord. Make a void—the Lord can only fill empty vessels.

The enemy of your soul will tell you, “You’re a fool.” Who cares? Be willing to make a fool of yourself for the Lord. Be willing to place yourself in a vulnerable situation to prove to others, and yourself, how mighty our God is!

The Lord gives confirmation to Jonathan and his armor bearer.

Confirmation is great to receive—UNTIL—you have to put your faith to the test.

Imagine yourself and one other person confronting 100,000 blood-thirsty soldiers. You are standing between life and death, not just of yourselves, but the nation you represent, your family, your friends.

When we face an impossible situation, we have the choice to give into fear, or to place our fear into submission to our almighty, powerful God.

Don’t allow the devil intimidate you. Speak the word of the Lord.

If you do not walk in your spiritual authority, someone will take it from you. Do not let the intimidator take your authority because intimidation will make your gifts dormant.

4.) Press Toward the Mark

Their victory did not come without physical exhaustion, faith, and work.

Jonathan and his armor bearer crawled on their hands and knees on slippery rocks for 3 miles. Every inch they covered was painful—but Jonathan knew he had a right to possess what was his.

That day, the army of the Lord accompanied Jonathan, and the Philistines became so overcome with fear, they began to slay one another in a wild frenzy.

Against all odds, Israel was victorious in battle.

You may be against innumerable impossibilities and maybe you have given into fear and intimidation; we are only human. However, we have a choice today to change our mindset. You and I have a decision before us, will we succumb to fear, or will we make a faith declaration and work for the promises God has confirmed to us?

You can be victorious and brave today, not in your flesh—but, in the power of God. 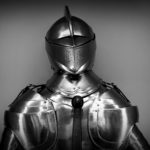 The Shield of Faith

The Purpose of this Waste

The Shield of Faith

The Immobility of Fear