The Spirit of the Lord is upon me, because he has anointed me to proclaim good news to the poor. He has sent me to proclaim liberty to the captives and recovering of sight to the blind, to set at liberty those who are oppressed, to proclaim the year of the Lord’s favor. Luke 4:18-19.

Sometimes when I invite someone to church, they will say, “Oh, if I come to your church, lighting will strike me.” The view of their lifestyle paralleled to the love of God is skewed. What they would discover in the presence of God are His tender mercies and unfailing love. On the other end of the spectrum, some don’t believe in the power of Jesus, despite your best convincing efforts.

Jesus has been at the center of many controversies throughout the generations. When we read the plethora of prophecies concerning the Messiah in the Old Testament, we would assume that it would be easy for the religious leaders to celebrate His arrival. What we discover is the opposite.

The spread of Hellenistic culture (ie: the spread of Greek culture) to Judaism was very prominent in the days of Jesus. Hellenized Jews took pride in staying true to their religious identity, but were influenced by their known world and became skeptical of this man, Jesus. The Pharisees and the Zealots differed in opinions but they also had strong convictions and high expectations about how the Messiah was going to liberate them, restore the monarchy of David and revolutionize their world.

When they met Jesus, it was anticlimactic for them. How could He be the Messiah? Jesus focused on the non-elites, the poor, the disparaged. He did things they would never dream of doing like touching a leper, healing on the Sabbath day, raising the dead, and instead of being served, He became the greatest servant of all.

Most people who experienced Jesus were those who were forsaken by society, immersed in sin, and desperate.

What the ‘religious people’ did not understand was, “Jesus is not capable of being defiled by the unclean. Their uncleanness does not touch Him, but rather removes their uncleanness by the power of his holiness. Touching the leper does not defile Jesus but heals (hence, cleanses) the leper.” David Arthur deSilva, An Introduction to the New Testament: Contexts, Methods and Ministry Formation (Downers Grove, IL: InterVarsity Press, 2004), 228

The more I live for God the less religious I want to be, meaning I don’t want to focus on other people’s opinions and expectations of God, but I desire a deep relationship with Jesus, that supersedes this world’s ideologies. I want to be desperate in His presence and long to know Him more.

You can’t keep a hungry person away from a table full of food. I want to be hungry for His word and share the bread of life with those who are empty.

When Jesus read in the synagogue He quoted Isaiah 61:1-2. He was making a declaration about who He was and proclaimed what He came to earth to accomplish. He did not come for the affluent, upper-class, religious society; He came to reach the lost, the hungry, and those who were sick.

We need to follow the example of Jesus by helping those who are in a state of despondency, proclaiming the gospel across the world, bringing restoration to those who are broken, and preaching healing and deliverance to the nations. And, if that’s you today, turn to Him because He cares so much for you. 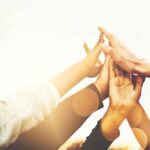 A Friend for Life: Finding Godly Friends and Knowing How to Let Go of Toxic Ones

Shame Has A Voice