Many people do not care about authenticity anymore.

If you have ever been to Canal Street in New York City, you will find a plethora of fake merchandise—anything from a faux Gucci bag, to a fake Rolex, to Chanel purses with backward C’s on the pleather exterior.

When a designer puts their own name on a product, it’s a stamp of quality and excellence. Tiffany & Co is named after its founder, Charles Tiffany, and has become the go-to jewelry story for the affluent and famous. Louis Vuitton was a French designer, who led in quality leather products, which are sought after today. Guccio Gucci was an Italian fashion designer who built a world-renowned fashion empire.

The problem with Canal street and every other outlet that sells fake merchandise, is that it that it devalues the original.

There is an ambivalence with counterfeit items or a counterfeit lifestyle because having the “real thing” will cost you more than a lot of people are willing to pay. Counterfeits thrive because they resemble the real thing; the same goes for being a Christian.

There are a lot of people in this world who proclaim to be a Christian, but they have not counted the true cost of what it means to be a disciple. The enemy of our souls is a thief of original things because he cannot create anything himself; he can only produce counterfeits off of the things God has created.

More prominent and celebrated than any designer, our Savior has placed His name on His church. You and I carry the name of Jesus upon our lives, which is the greatest honor we will ever have on this earth. The best thing you and I can be is an authentic representation of who Jesus is and demonstrate that we are the body of Christ in a broken world. Only God has the authority to give us our identity.

And when he (Barnabas) had found him (Saul), he brought him unto Antioch. And it came to pass, that a whole year they assembled themselves with the church, and taught much people. And the disciples were called Christians first in Antioch.
Acts 11:26, KJV.

This is the first mention of the word Christian in the New Testament. In fact, the words Christian/Christians is mentioned only 3 times in scripture, while the words disciple/disciples is mentioned over 270 times. Sobering isn’t it?

To be an authentic Christian we have to first become a disciple of Jesus. Salvation is free for all, but discipleship will cost you everything.

Then Jesus told his disciples, “If anyone would come after me, let him deny himself and take up his cross and follow me.For whoever would save his life will lose it, but whoever loses his life for my sake will find it. For what will it profit a man if he gains the whole world and forfeits his soul? Or what shall a man give in return for his soul? Matthew 16:24-26.

Today, lets pray that we would live authentic lives as disciples who are willing to pay the price to follow Jesus.

In The Secret Place 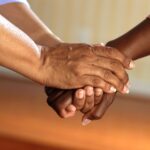