“There is a lad here, which hath five barley loaves, and two small fishes: but what are they among so many?” John 6:9 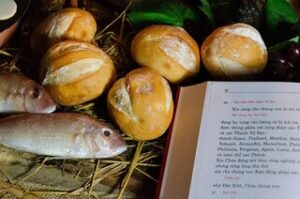 As I read this story, memories came back from my childhood days. During summer break from school, once our chores were done for the day, my friends and I would set out for a day of exploring. I can remember my mother making me sandwiches to take along, for she knew we would be hungry before we returned home.

Picture this little lad as he put on his sandals, reached for the lunch his mother had prepared for him and followed the crowd up the mountain behind Jesus. He had heard of the many miracles that Jesus had performed and wanted to see for Himself if they were true. As the crowd found places to sit on the ground, he pushed his way right to the front. He became so interested in the words of Jesus, that he forgot all about the lunch he carried. Until he heard Jesus tell his disciples to give the people something to eat.

Philip informed Jesus that they did not have food to give to the crowd. Then, the lad remembered his lunch, and he got Peter’s attention long enough to show him the five loaves and two fishes that his mother had given him. I am sure that there were others in the crowd who had also brought food, but there is no record of them offering to share.

Can you just imagine this boy’s feelings as he watched Jesus give thanks and then begin to break the small loaves apart? As they grew and multiplied in His hands, he passed them to the disciples to distribute. He did the same with the two little fish. What a great miracle. Everyone in the crowd had all they wanted to eat. And then the disciples gathered up twelve baskets full of leftovers.

Little boys are always hungry, and most boys don’t like to share. But this young lad had forgotten about his lunch until He heard that Jesus had need of it. He was willing to give all that he had, and Jesus blessed it and multiplied it far beyond what he could comprehend. What an exciting story he would have to share with his family as he returned home!

I know the scripture in Isaiah 11:6 “and a little child shall lead them” is speaking about the time when Jesus returns to earth. But perhaps it could apply to this instance very well. Children have a simple faith. When they learn that Jesus loves them, they accept it and believe it. When they are told that God answers their prayers, they are quick to ask in faith and believe the Lord to meet them. How precious they are to the Lord.

This unnamed lad gave all that he had to the Lord. Jesus accepted it, blessed it, and fed the multitude. Whatever we give to the Lord, whether it be small or great, He will bless and use for the furtherance of His kingdom.

Prayer: Jesus, thank you for giving your all so that we might have life. Help us to be willing to give of our time, talents, and treasures to the work of Your kingdom.