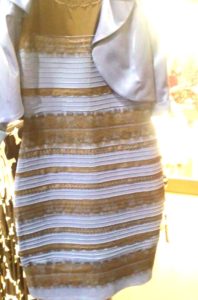 Call it curiosity, or stubbornness, I wouldn’t give up until I knew the answer to this seeming paradox.  The manufacturer of the dress soon gave it:  the dress was black and blue!  That was the truth, even though I had seen and (passionately) believed something different.

Isn’t life like that?  People see things differently, agree to disagree, and contend for personal views.  But at the end of the day, there is an absolute truth revealed.  Or is there?

In a 2016 study called The End of Absolutes: America’s New Moral Code, research reveals that the majority of Americans believe “knowing what is right and wrong is a matter of personal experience” and that over 70% of  Millennials agree that “whatever is right for your life or works best for you is the only truth you can know.”  This, apparently, is the definition of truth in post-modern culture:  “whatever works for you.”

But what happens when personal truths collide?   All of us can think of examples in our own lives when another person’s “truth” clashed with our own.  At best it is confusion, at worst it is tragic.  The definition of truth, in my opinion, is the single most important question a person will ever answer for themselves.  Why?  Because what you believe will determine every single choice you make every single day; what you believe is the truth will decide your destiny, both in this life and the one to come.  So… with that sobering thought in mind, isn’t it worthwhile to explore the question, “does absolute truth exist?”

Awhile back I did an extensive amount of research on the validity of the Bible.  I poured through historical and archeological documents and secular eyewitness accounts like Josephus, who was a first century historian.  I discovered that the evidence for the integrity and validity of the Bible is truly overwhelming.  Did you know there is literally more evidence for the Bible than any other piece of classical literature, including Plato and Shakespeare?  Right about here in this Bible Study blog is where I figured I would bullet-point an extensive list of facts that would help the reader to be totally convinced that the Bible came from God, has been purely preserved, and is the only source of absolute truth in the world.

But the truth is – anyone curious enough can find all this information at the click of a button or the turning of a page.  After all, this is the Information Age.  What is astounding is the number of people who reject the Bible as truth, even though it is by far the bestselling book of all time (more than 5 billion copies sold!)

Instead, I will share my personal journey into truth, what I discovered about the Bible, and why I almost lost faith in it.

The Bible Can Be Tested

Early in my adult life, I put the Word of God to a test.  Although I was raised in an environment of much fear, I noticed that the Bible says we should “walk by faith” in God (2 Corinthians 5:7).  It also says that if we will make God our first priority, He will take care of us and provide all of our needs (Matthew 6:33).  Since I had been raised in very unstable circumstances, this was scary for me.  When I was 19 years old I was on my own with a great job and finally had stability in my life.  But one day I was informed that the company I worked for would begin scheduling me every Sunday.  I knew the Bible said I should make the kingdom of God my first priority, but if I lost my job I didn’t have another home to run to.  With much trepidation I decided to try God’s Word.  I gave the company my two week notice, and continued to go to church.  A few days before my job ended, I received an offer from a better company, with better hours and benefits, and the same amount of money.  I started my new job the next week.

The Bible Is Misrepresented

Many people have wrong impressions of the Bible because it has been misrepresented.  Instead of actually reading it, they will take someone else’s opinion, or look at the discrepancies in a Christian’s life, and begin to believe the Bible is a hoax.  I almost fell into this trap as a young adult because I had been greatly hurt by people who quoted the Bible.  When I began studying the Bible intensely for myself, I discovered three things: one, its motive is love; two, its promises are true; and three, its principles work.  Many times when I felt all alone, I would read the scriptures and feel the sweet love of God comforting me through the pages.  When I applied its principles, I experienced peace, order and purpose in my life.  Consequently, I learned not to judge God and His Word by the actions of others.

The Bible is Timeless and Relevant

Many people today think the Bible is outdated.  If they would actually read it, they would know that humans live in time, but God does not.  Since God is the creator of time, wrote the Bible (1 Peter 19:21, 2 Timothy 3:16-17), and exists in the past, present and future, His words are truth for every age.  “His truth endures to all generations.” (Psalm 100:5).  “Heaven and earth will pass away, but My words will by no means pass away.” (Matthew 24:35).

Praying to the Father, Jesus defined truth in four words:  “Your word is truth.”  Boom.  After all the great philosophers and geniuses have their say, it all comes down to this:  God’s Word is truth.  Like the black and blue dress, opinions abound, but you cannot change the truth.

Your comments and questions are welcomed in the comments section below.  Join us tomorrow for the second blog in this series:   “The Word Builds Faith!”

For study resources on the validity of the Bible:  Click here 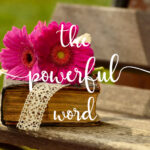