“And the Lord said, Simon, Simon, behold, Satan hath desired to have you, that he may sift you as wheat: But I have prayed for thee, that thy faith fail not: and when thou art converted, strengthen thy brethren.” Luke 22:31-32.

Bold, impetuous Peter, so confident that he would never turn his back on Jesus, that he would go with Him even unto death, did not realize that he was facing one of the biggest tests of his life. Jesus had chosen him for a reason and a purpose. He would be the one who would proclaim the news of Jesus’ resurrection and His plan of salvation to the Jews and to the Gentiles.

Satan also knew the Lord’s plan for Peter, and would do everything in his power, to deter him from fulfilling his purpose. Jesus knew what was coming and so he warned Peter that he would deny him. But he told him, He had prayed for him that his faith would not fail. A few hours later when Peter realized that He had done just what the Lord had said, the Scripture tells us he went out and wept bitterly.

Can you imagine how different the New Testament story would have been if Peter had given up just because He had failed in his time of testing. If, like Judas, he had decided there was no hope and just walked away from his faith instead of repenting and calling out to the Lord for forgiveness, he would not have been in the upper room with the other disciples waiting for the Holy Spirit to descend. He would not have been there to preach the first sermon, that caused many people to accept the Lord.

We may not face the same things that Peter did, but we can be assured there will be times in our lives when we will make mistakes, and even fail the Lord. But the important thing is to keep our faith in Jesus intact. No matter how many times we may fall, we know that the Lord will be there to show us our mistakes, and to forgive us when we ask Him. He has a place for each one of us to fill in His kingdom, and I am sure, Satan would like to prevent us filling it. But when we keep our faith strong, the Lord will always be there to help us.

Prayer: Thank you Jesus for your faithfulness, and for knowing that you are always there to hear our cry for help and strength to live for you. 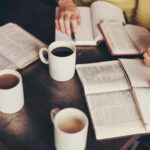