“John did baptize in the wilderness, and preach the baptism of repentance for the remission of sins. And there went out unto him all the land of Judaea, and they of Jerusalem, and were all baptized of him in the river of Jordan, confessing their sins.” Mark 1:4-5 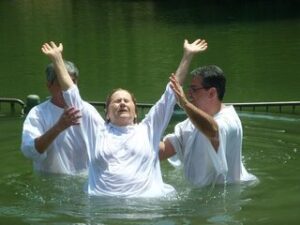 From all the land of Judea, crowds gathered to hear this strange preacher who had suddenly come on the scene. He was different in so many ways; he didn’t dress like most people; even the food he ate was not what they were used to. And yet, somehow the message he proclaimed convicted them of sin, and they repented and were baptized by him in the Jordan river. He kept telling them that someone much more important than he would soon appear who would baptize them with the Holy Ghost.

Then one day, Jesus appeared and asked John to baptize Him. At first, John refused, claiming that it should be the other way around. But Jesus convinced him that it was necessary to fulfill all righteousness. When Jesus came up out of the water, the Spirit of God descended like a dove lighting upon Him and a voice from heaven confirmed that He was the beloved Son. So, Jesus set an example for all of us by being immersed in the waters of baptism.

Reading this account in the scriptures again, reminded me of the day when I was baptized as a young girl. It was not in a river, but in the little Otnabog Stream on a day in June. My older brother and my mother were also baptized that day. I can even remember what I was wearing. At the time I did not fully understand the significance of what I was doing. I only knew that I wanted to live for the Lord and that this was a step I needed to take.

When I was growing up, most baptisms were performed in a river or brook. Today our churches have nice baptismal tanks, filled with warm water. I taught a Bible Study a few years ago to a lady who had some disabilities, and it was not possible for her to be baptized in our church. So, the pastor came to her apartment and baptized her in her bathtub. People have been baptized in swimming pools. It is not the place that matters; it is the fact that we obey the words of the Lord.

Just as Jesus died, was buried, and rose again, so we must repent of our sins, be buried in His Name for the remission of our sins, and then receive His Holy Spirit.

Acts 2:38 “Then Peter said unto them, Repent, and be baptized every one of you in the name of Jesus Christ for the remission of sins, and ye shall receive the gift of the Holy Ghost.”

Perhaps you are reading this today, and you have never taken on the name of Jesus in water baptism. My prayer is that you will take some time to talk to the Lord about it and be willing to obey His voice and find your Jordan River today.