“And the LORD descended in the cloud, and stood with him there, and proclaimed the name of the LORD. And the LORD passed by before him, and proclaimed, The LORD, The LORD God, merciful and gracious, longsuffering, and abundant in goodness and truth, keeping mercy for thousands, forgiving iniquity and transgression and sin, and that will by no means clear the guilty; visiting the iniquity of the fathers upon the children, and upon the children’s children, unto the third and to the fourth generation.” Exodus 34:5-7

Reading the Bible through each year, I am sure I have read this passage many times, but it seemed like something entirely new when I read it this year.  Can you just imagine how Moses must have felt as God appeared to him in a cloud?  He could not see God’s face, but he could sense His presence in a powerful way. And then He began to describe to Moses what He was like.

When Jesus was here on earth, people were able to behold Him in a human body.  He showed by His teachings and miracles that He possessed all these attributes of God.  He said that those who had seen Him had seen the Father, for in Him dwelt all the fullness of the Godhead bodily.

We cannot see God in a physical form today, but through eyes of faith we have found Him to be all these things to us: merciful, gracious, longsuffering, abundant in goodness and truth and forgiving.  Through His Word, we come to know Him in a personal way as our friend and Saviour.

Is He all those things to you today?  Have you brought all your cares and your worries to Him, and let His presence rule and reign in your life? If not, He is just waiting for you to call on His Name.

Prayer:  Jesus we thank you for your great love to us and for the forgiveness we have received from you.  Help us to show forth your love to others.

When God Calls He Equips 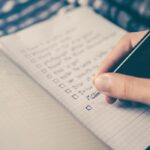