“Howbeit for this cause I obtained mercy, that in me first Jesus Christ might shew forth all longsuffering, for a pattern to them which should hereafter believe on him to life everlasting.” I Timothy 1:16

Have you ever heard someone say, “God could not forgive me, I am too great a sinner?” The devil would like to make us believe that we have done so many bad things, that the Lord could not love or forgive us. If he can convince a person of this, then they do not have the faith to cry out to God for salvation.

Paul in verse 15 of this same chapter said he was chief of all sinners, and in the verse above, he said that he had obtained mercy. All have sinned and come short of the grace of God, but His mercy is extended to all who will call out to Him in faith, accept the sacrifice He made on Calvary, repent of our sins and let His blood cleanse us.

As I was reading this verse the other day, I realized that if God was able to forgive Paul, after the way he had treated believers in Jesus, then He certainly can forgive anyone who calls upon Him. Paul said his conversion was a pattern to all. I am thankful for the mercy He extends, and the hope He gives us of life everlasting.

Prayer: Thank you Jesus for the mercy you have shown and the promised that anyone who calls on your Name can be saved. 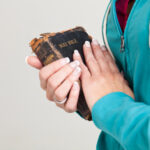 Rest For Our Soul