While they were traveling, he entered a village, and a woman named Martha welcomed him into her home. She had a sister named Mary, who also sat at the Lord’s feet and was listening to what he said. (Luke 10:38-39, CSV)

Have you ever wished you had lived in Bible times—walking the roads Jesus walked, hearing Him teach, seeing His miracles? What a thrill to be part of the crowd and realize that perhaps He was the one, the long-awaited Messiah. But in thinking about it, I decided I’d rather enjoy time with Him in a closer setting, such as the home of Mary, Martha, and Lazarus. Even better, I would like to sit on the floor beside Mary as she listened to the words of the Teacher.

The term “sit at (someone’s) feet” means that person is a learner or disciple. It signifies reverence, respect, and admiration for their teacher. The apostle Paul says in Acts 22:3 that he learned “at the feet of Gamaliel,” a noted teacher of his time. The term is still used today when we choose to learn from another to gain knowledge in a certain area.

position of a disciple

Mary sat at the feet of Jesus, much to the dismay of her sister who wanted help with serving their guests. What Mary did was unusual for that time. Rabbis (teachers) did not have female students. Yet Mary’s desire to learn from the teachings of the Lord drew her to that place near His feet. The Lord did not send her away but acknowledged she had chosen “that good part, which shall not be taken away from her” (Luke 10:42}.

What is a disciple? The simple answer is a learner. It is someone who learns and follows the ideas or beliefs of another. But true discipleship goes deeper than that. Something I recently read described a disciple as “someone who learns from him to live like him.” This should be our goal as a disciple of the Lord. The more we take on His characteristics, the greater our growth. Ultimately, the disciple should become one who disciples (mentors) others to follow the Lord.

Although we are living two thousand years after Mary, we can still sit at the feet of Jesus. Someone once described it as a posture of the heart more than a position in the room. Sitting there, we listen to His voice and learn from Him. We learn how to apply those lessons in our own lives and actively live His words. The more we sit at His feet, listening and learning, the more we become like Him.

In Luke 14:25-33 the Lord defines true discipleship.  Some would find His words blunt, even harsh, but discipleship requires dedication and faithfulness. He asks that we forsake all other entanglements and pick up our cross to follow Him. We must place Him above everything else in our lives. Discipleship is not a when-it’s-convenient-to-me, on-again, off-again, type relationship. It requires commitment and unwavering devotion.

Everyone is welcome at the feet of Jesus, not just an elite few. At His feet we learn, we worship, we submit, we mature into the disciple He desires us to be. Mary did indeed choose the better part—and we can too. 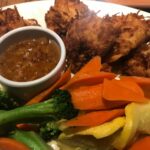 Is There Lunch Today? 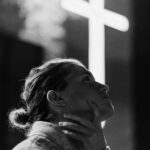