Widget not in any sidebars


Since the beginning of time, God has desired a close, special, intimate, personal, one on one, relationship with mankind.

Each evening God himself walked and talked with Adam & Eve in the Garden of Eden – until Adam & Eve’s SIN separated them. Sin created a huge gulf or chasm between God and man. But God knew this would happen, so He set in motion His plan to bring salvation to mankind.

In the meantime, God gave the pattern and instructions for a tabernacle – a portable tent – that served as a place where God could meet with man. The people were required to bring sacrifices for their sins, and God would roll their sins ahead for a year. God would only meet with one man (the high priest) once a year.

Solomon, and later King Herod, built temples in which the people could worship God. Still, God observed their sacrifices and offerings, but did not have the personal relationship with man that He desired.

Then God “robed himself in flesh”, and became a man named JESUS. For 33 years, he lived among us – a perfect, sinless man. Now He was living “with” us, but not “within” us! He gave Himself as the sinless sacrifice for our sins when He was crucified on the cross. His death on the cross, and the blood that He shed, built a bridge across the chasm created by sin. Now, man could have his sins forgiven. Jesus was then buried, rose from the dead, and some days later, ascended back into heaven.

Fifty days later on the “Day of Pentecost”, God poured out His Spirit on the 120 believers waiting in an Upper Room in Jerusalem. NOW, God himself could live within man and commune with man – anytime, anywhere, about anything…  And with anyone that would invite Him in!!

Where do we find the plan of salvation for the New Testament church?

There is no mention of the church in these books.

This book documents the birth of the church on the Day of Pentecost. God poured out His Spirit on the waiting believers, and then through them, reached the world with the gospel.

These were letters written to saints (believers) and churches that had already experienced the plan of salvation.

Let’s examine the book of Acts:

1. Repent,
2. and be baptized every one of you in the name of Jesus Christ for the remission of sins
3. and ye shall receive the gift of the Holy Ghost.

This plan of salvation was experienced by 3,000 additional believers on the day of Pentecost, and then the gospel spread to other Jews, Samaritans, and then to the Gentiles.

Let’s examine three accounts given in the book of Acts that illustrate this plan of salvation experienced by the early church:

Note in each story:
How they were baptized (italicized and bold) and
What happened when they received the Holy Ghost (bold)

1 And when the day of Pentecost was fully come, they were all with one accord in one place.
2 And suddenly there came a sound from heaven as of a rushing mighty wind, and it filled all the house where they were sitting.
3 And there appeared unto them cloven tongues like as of fire, and it sat upon each of them.
4 And they were all filled with the Holy Ghost, and began to speak with other tongues, as the Spirit gave them utterance
* * *
37 Now when they heard this, they were pricked in their heart, and said unto Peter and to the rest of the apostles, Men and brethren, what shall we do?
38 Then Peter said unto them, Repent, and be baptized every one of you in the name of Jesus Christ for the remission of sins, and ye shall receive the gift of the Holy Ghost.
39 For the promise is unto you, and to your children, and to all that are afar off, even as many as the LORD our God shall call.
40 And with many other words did he testify and exhort, saying, Save yourselves from this untoward generation.
41 Then they that gladly received his word were baptized: and the same day there were added unto them about three thousand souls.

1 There was a certain man in Caesarea called Cornelius, a centurion of the band called the Italian band,
2 A devout man, and one that feared God with all his house, which gave much alms to the people, and prayed to God alway.
3 He saw in a vision evidently about the ninth hour of the day an angel of God coming in to him, and saying unto him, Cornelius.
4 And when he looked on him, he was afraid, and said, What is it, Lord? And he said unto him, Thy prayers and thine alms are come up for a memorial before God.
5 And now send men to Joppa, and call for one Simon, whose surname is Peter:
* * *
44 While Peter yet spake these words, the Holy Ghost fell on all them which heard the word.
45 And they of the circumcision which believed were astonished, as many as came with Peter, because that on the Gentiles also was poured out the gift of the Holy Ghost.
46 For they heard them speak with tongues, and magnify God. Then answered Peter,
47 Can any man forbid water, that these should not be baptized, which have received the Holy Ghost as well as we?
48 And he commanded them to be baptized in the name of the Lord. Then prayed they him to tarry certain days.

1 And it came to pass, that, while Apollos was at Corinth, Paul having passed through the upper coasts came to Ephesus: and finding certain disciples,
2 He said unto them, Have ye received the Holy Ghost since ye believed? And they said unto him, We have not so much as heard whether there be any Holy Ghost.
3 And he said unto them, Unto what then were ye baptized? And they said, Unto John’s baptism.
4 Then said Paul, John verily baptized with the baptism of repentance, saying unto the people, that they should believe on him which should come after him, that is, on Christ Jesus.
5 When they heard this, they were baptized in the name of the Lord Jesus.
6 And when Paul had laid his hands upon them, the Holy Ghost came on them; and they spake with tongues, and prophesied.

YOU can experience your own personal Pentecost!

“Then Peter said unto them, Repent, and be baptized every one of you in the name of Jesus Christ for the remission of sins,…” (Acts 2:38)

Baptism is necessary for salvation:

Baptism must be in Jesus Name:

The disciples baptized everyone in Jesus Name:

When you are baptized in Jesus Name, your sins are remitted, forgiven, washed away, never to be remembered against you!

“Then Peter said unto them, Repent, and be baptized every one of you in the name of Jesus Christ for the remission of sins, and ye shall receive the gift of the Holy Ghost.“ (Acts 2:38)

The Holy Ghost is for everyone:

The Holy Ghost is a necessary part of the plan of salvation:

Speaking with tongues is the consistent evidence that each one received the Holy Ghost.

The scripture reveals 3 facets of salvation:

Receiving the Holy Ghost with the evidence of speaking in tongues

Paul called this “the Gospel”! “Moreover, brethren, I declare unto you the gospel…how that Christ died for our sins…and that he was buried, and that he rose again the third day…” I Corinthians 1:1,3,4

We experience the gospel when we’ve experienced the plan of salvation:

Jesus died; We die in repentance
Jesus was buried; We are “buried in baptism”
Jesus rose again;  We receive the Holy Ghost & new life!

When you have experienced repentance, baptism in Jesus Name and the infilling of the Holy Ghost, you have been born into the family of God. Jesus is now your Father, and you are His child.

Paul wrote it this way:
“…as God hath said, I will dwell in them and walk in them; and I will be their God, and they shall be my people. Wherefore come out from among them, and be ye separate, saith the Lord, and touch not the unclean thing; and I will receive you, and will be a Father unto you, and ye shall be my sons and daughters…” II Corinthians 6:16,18

You are a CHILD OF GOD! 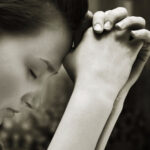