“But Jesus beheld them, and said unto them, With men this is impossible; but with God all things are possible.” Matthew 19:26

I have been thinking about a quote I saw recently, “God is in control, but He doesn’t expect you to lean on a shovel and pray for a hole.”

I began to think of instances in the Bible where things seemed impossible, but as people reached out in faith, and did what they could, then the Lord came through with the miracle they needed.

As the giant Goliath stood before the Israelites, bringing fear into their hearts, David decided that something should be done. He knew that God was able to defeat the enemy, but he did not walk out on the battlefield empty handed. He prepared his sling and picked up some smooth stones. He did what He could and trusted God to do the rest.

When the widow woman came to Elisha asking him for help to prevent her sons being sold as slaves, Elisha asked her what she had in her house. He told her to gather vessels from her neighbours and fill them with oil. She didn’t just line up the empty jars and stand there waiting for them to fill with oil. She began to pour oil from her jar into each one until all were filled. She did what she could, and God provided the miracle.

At the wedding feast in Cana when they ran out of wine, Mary told the people in charge that Jesus would do something for them. He could have spoken the word and the water would have been changed to wine. But instead, He told the servants to start pouring the water into the jars. As they did what was possible, Jesus did the impossible and the water became wine.

There are other stories in the Bible that follow this same theme. God is in control, and He wants us to have faith in Him. But faith without works is dead. Often, He is waiting for us to do what we can do, then trust Him to do what is impossible.

Are you asking the Lord for something special to happen in your life? Are you perhaps just leaning on the shovel, waiting for the hole to suddenly appear? Ask the Lord to show you what you have in your hand and what is possible for you to do, as you trust Him to do what seems impossible. Sometimes He is waiting for us to step out and do something before He provides the miracle.

Prayer:  Jesus we know that you are able to do the impossible as our faith reaches out to you. Help us to see what you want us to do to be ready for the miracle. 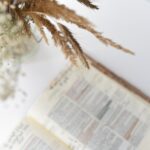 Create in Me: He Does Not Let Us Forget