“And Hilkiah, and they that the king had appointed, went to Huldah the prophetess, the wife of Shallum the son of Tikvath, the son of Hasrah, keeper of the wardrobe; (now she dwelt in Jerusalem in the college:) and they spake to her to that effect.” II Chronicles 34:22

Huldah is not a name we hear mentioned very often.  She is only referred to twice in the Bible – in the above verse and also in I Kings 22:19. But she was used by God in a special way and perhaps we can learn some lessons from her.

When the young King Josiah read the book of the law which had been discovered while the temple was being refurbished, he was very troubled because he saw that God was displeased with how His people were living.  At this time, Isaiah and Zephaniah were prophets in Israel, but Josiah did not send for them, but instead sent for Huldah, a prophetess to find out what they should do.

The Bible says she was a keeper of the wardrobe.  That brings up a picture of a lady who spent her time in the house of God, looking after the vestments of the priests.  Doesn’t sound like an important job, but yet, she was faithful in it.  I would like to think that as she went about her duties, she spent time in prayer, and learning about the things of God. She had an inner peace in her heart and possessed a confidence in Him. She was faithful in small things, and so God chose her for something greater.

The message she had to send back to King Josiah was not a comforting one.  She spoke the words God had told her about judgment that was coming on the people because of their disobedience and refusal to walk in the way the Lord had commanded. She spoke the truth to the King, even though she did not know what his reaction would be.

What can we learn from Huldah?  By trusting and obeying the Lord, we develop an inner peace and a strong confidence in God. Each day we go about our daily tasks, faithfully doing what our hands find to do. We spend time in prayer, ever drawing closer to the Lord. We may never be sought by a king, but perhaps the Lord will lead us to speak to someone who is looking for answers. Perhaps there is someone watching the way we live, and when they need a word from the Lord, we will be ready to witness to them.  Be faithful, trust God, and be willing to trust Him.

Prayer:  Jesus, thank you for the peace that we find in you.  Thank you that we can rest confidently upon your promise to always lead us and guide us.  Help us to always be ready to be used of you. 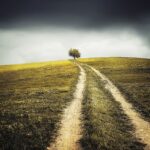