“Moreover, it is required of stewards that they be found faithful.” (I Corinthians 4:2 ESV).

In this 3-Part Bible study series, we will discover faithfulness as the foundation for courageous Christians:

“Now in this way those who are trusted with something valuable [stewards; household managers] must show they are worthy of that trust [be found faithful].

In the first lesson, we discussed that faithfulness is not common in our world, but God’s people are called to faithfulness.

Without question, there are many obstacles that we will encounter as we strive to be faithful in our relationship with God.  How we respond in difficult moments is key to our faithfulness. Will we give up?  Will we run away?  Will we remain faithful?

In this third lesson, we are digging deep to uncover the greatest obstacle to faithfulness among believers.  This issue is running unchecked in the earth right now.  In it’s wake are wounds, negative feelings, upheaval, confusion, idle people, untapped potential, and forfeited eternal rewards.

The greatest obstacle to faithfulness is fear!

In our day, we are experiencing massive community fear.  Fear and panic can make people react without sound judgment and live in ways contrary to God’s Word.

Jacek Debree of the University of Michigan psychiatry department notes:

“As cases of COVID-19 proliferate, there’s a pandemic of fear unfolding alongside the pandemic of the coronavirus.”

Due to the global reach and instantaneous nature of modern media, fear contagion spreads faster than the dangerous yet invisible virus.

A recent news headline said, “Nothing spreads like fear: COVID-19 and the dangers of emotional contagion.”  Watching or listening to someone else who is scared can cause you to be frightened. What is your experience with how fear spreads in your personal life, community, and the world?

The Danger of Fear Contagion

Fear contagion is an old phenomenon that researchers observe in many animal species. It can serve as a valuable survival function, but it also creates mass panic.

Brains are hardwired to respond to threats in the environment perceived by sight, smell or sounds. The brain’s amygdala then coordinates the fear response. The amygdala is in the brain’s temporal lobe. It receives sensory information and quickly detects stimuli associated with danger. Then the amygdala forwards the signal to other parts of the brain to further coordinate specific defense responses. These outcomes are commonly known as fright, freeze, flight or fight.

For example, think of an antelope’s reaction to the sight, smell or sound of a lion nearby. The initial fear response is self-preservation, but fear contagion multiplies that fear to the whole herd. The other antelope in the group run for their lives following the one frightened group member in an automatic response.  Their escape, however, was not directly initiated by the lion’s attack but by the behavior of their terrified group member: momentarily freezing, sounding the alarm, and running away. The group as a whole picked up on the terror of the individual and acted accordingly.

Like the animal kingdom, people are also sensitive to panic or fear expressed by others. Human beings are finely tuned to detect other people’s survival reactions.

Studies in animals confirmed that the message about another’s fear travels from the ACC (anterior cingulate cortex) to the amygdala, where the defense responses are set off.  How does this phenomenon explain mass panic attacks that can occur during music concerts, sports events or other public gatherings?

Once fear is triggered in the crowd – maybe someone thought they heard a gunshot – there is no time or opportunity to verify the source of terror. People rely on each other, just like antelopes do.

The fear travels from one to the next, infecting each individual as it goes. Everyone starts running for their lives. Too often, mass panic ends in tragedy.

Antelope on the Savanna stop running once they are a safe distance from a predator, but disturbing images on the news can keep people fearful. Fear contagion constantly evolves in the always-on environment of social media and 24-hour news.  The feeling of immediate danger never subsides.

What are some current trends that confirm the world is in a corporate state of fear and panic?

The global pandemic may be the most recent cause for fear, but fear is nothing new.  The Bible is filled with examples of people reacting with corporate fear.

As believers, what are some ways that we can stop fear contagion in our church and community?

Win the Battle Over Fear

Fear is ruling the lives of many, but we can make the conscious choice that we will not live in fear.

It begins with understanding who we serve.  He is…
All powerful.  All knowing.  All seeing.  Always present.

With the unlimited God for a companion there is no reason to panic—no matter what is taking place around us.  As human beings we will experience fear, but we can refuse to live in fear.  How can you apply this understanding to your life today?

Hebrews 11 records a list of faith heroes. Their lives are remarkable examples of faithfulness to us. But as we study their stories it doesn’t take long to see that each one conquered some sort of fear in order to accomplish great things for God.

God reminds us in moments of fear and isolation not to be afraid.

Do a study of scripture where God’s people are told to “fear not.”  Apply what you learn to your life.

Well-known patriarchs of the faith and little-known people of faith all overcame fear so they could be found faithful.

One of these little-known heroes of faith was a man named Benaiah. You can find his story in 2 Samuel 23.

“And Benaiah the son of Jehoiada, the son of a valiant man, of Kabzeel, who had done many acts, he slew two lionlike men of Moab: he went down also and slew a lion in the midst of a pit in time of snow: And he slew an Egyptian, a goodly man: and the Egyptian had a spear in his hand; but he went down to him with a staff, and plucked the spear out of the Egyptian’s hand, and slew him with his own spear. These things did Benaiah the son of Jehoiada, and had the name among three mighty men.” (2 Samuel 23:20-22)

Benaiah made the choice to live in faith rather than react in fear.

Among the highlights of Benaiah’s life was his greatest accomplishment in a pit on a snowy day. Apparently, Benaiah had been tracking this lion for some time in the snow.  At some point the hunting lion became the hunted lion.

Your greatest moments of triumph will come in the face of fear!

Instead of fleeing or running away as others no doubt did, Benaiah chased the lion.  He pursued his victory.

Benaiah tracks the lion to the pit willing to risk all. Was he afraid?  Yes.  Was he anxious?  Yes.  Fear is a battle that must be fought.

Benaiah goes into the pit with lion.  There is the noise of a fight. Then deafening silence. A few moments later Benaiah climbs out of the pit covered with bruises, cuts, red blood dripping on the white snow.  Benaiah might have looked bad but the lion was dead!

He could have been glad the lion was far away in the pit and moved on.

He could have run in fear and no one would have blamed him.

But something in Benaiah realized his destiny was connected to overcoming fear and defeating this lion.  He said, “I can’t back down!”  He could have played it safe, but there are no memorable victories in comfort.  Benaiah experienced great victory because he did not let fear rule.

Miracles and victories never come lion-free. In what specific ways can you make the decision for faith over fear today?

As a result of a decision to face fear, Benaiah was promoted to the king’s staff. Sometime later when King David is looking for someone to lead his guards, he looked through a long list of applicants for the prestigious position.

Applicants highlighted their military background, experience on King Saul’s staff, weapons skill, etc.  On down the list appeared this resume, “chased a lion into a pit on a snowy day and killed it.” Now that was the kind of bravery the king was looking for!

King David hired Benaiah ahead of all other applicants because he passed the fear test (2 Samuel 23:23).

When Benaiah conquered fear, he not only became the captain of David’s guard, but he was also appointed over the entire host of Israel under Solomon’s reign (1 Kings 4:4).  The legacy of this man was known throughout Israel. When there was a job that required courage, they knew who to call – the lion slayer!

Courage is fear that has said its prayers.

The Bible says great fear is one of the signs of the last days.

“And there shall be signs in the sun, and in the moon, and in the stars; and upon the earth distress of nations, with perplexity; the sea and the waves roaring; Men’s hearts failing them for fear, and for looking after those things which are coming on the earth: for the powers of heaven shall be shaken.” (Luke 21:25-26)

Today, we see the signs of distress, confusion, and great fear.  To the church, Jesus says, “Be thou faithful!”

“Fear none of those things which thou shalt suffer: behold, the devil shall cast some of you into prison, that ye may be tried; and ye shall have tribulation ten days: be thou faithful unto death, and I will give thee a crown of life.”  (Revelation 2:10 KJV)

“For ye have not received the spirit of bondage again to fear; but ye have received the Spirit of adoption, whereby we cry, Abba, Father.” (Romans 8:15 KJV)

“According to the word that I covenanted with you when ye came out of Egypt, so my spirit remaineth among you: fear ye not.” (Haggai 2:5 KJV)

“Thus saith the Lord the King of Israel, and his redeemer the Lord of hosts; I am the first, and I am the last; and beside me there is no God. And who, as I, shall call, and shall declare it, and set it in order for me, since I appointed the ancient people? and the things that are coming, and shall come, let them shew unto them. Fear ye not, neither be afraid: have not I told thee from that time, and have declared it ? ye are even my witnesses. Is there a God beside me? yea, there is no God; I know not any.” (Isaiah 44:6-8 KJV)

The Bible says the Devil is as a roaring lion roaming to and fro seeking whom he may devour (I Peter 5:8).  He has been doing the chasing long enough.  God’s people are about to make the hunter the hunted!  Fear will not control us.  Can the King of Kings count on us to face fear with faith?  He has a place for us in His Kingdom if we are found faithful! 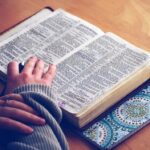 The Word at Work in Me