“The LORD your God will soon bring you into the land he swore to give you when he made a vow to your ancestors Abraham, Isaac, and Jacob. It is a land with large, prosperous cities that you did not build, houses filled with choice things you did not accumulate, hewn out cisterns you did not dig, and vineyards and olive groves you did not plant – and you eat your fill, be careful not to forget the LORD, who rescued you from slavery in the land of Egypt.” (Deuteronomy 6:10-12, New English Translation)

The slavery of Egypt now lay behind the children of Israel, and God said wonderful things awaited them in the Promised Land. The cities were well established, the houses already built and filled with nice things. The cisterns were dug, and even the vineyards were planted. God promised that everything they needed would be ready and waiting for them. He only asked one thing: Don’t forget Me. I’m the One who brought you out of slavery.

But they did forget!

After all of their God-given blessings and provisions, what would cause the Israelites to forget the One who supplied their every need? Did comfort turn into complacency. Were they preoccupied with the things of daily life and took God’s blessings for granted? I think we find the answer in Hosea 13:6.

When I read of the forgetfulness of the Israelites, it makes me pause and question my own actions. Do I take God’s blessings for granted? Do I think He “owes me” all the wonderful things He has placed in my life because I’m such a good person? Have I become satisfied, proud, and forgetful?

Do our abundant blessings cause us to forget God? I pray not!

Remember the prodigal son in Luke 15? He took his portion of the inheritance and left home. As long as he had money in his pocket and friends to party with, he didn’t think much about home. He was full. But when the money ran out and the friends left, when hunger pangs seized him and he was existing in a pigpen, he remembered his father’s house.

“But when he came to his senses he said, ‘How many of my father’s hired workers have food enough to spare, but here I am dying from hunger!’” (Luke 15:17, NET)

God has blessed us with so much, but even in our fullness we must never forget who provided these gifts to us. He delivered us from the slavery of sin and has provided all that we need to thrive—grace, mercy, forgiveness, love, and the promise of eternal life.

Never let Him say, “They forgot me.”

Lord, I appreciate the many blessings You have given me. Not just material blessings, but Your love and forgiveness. Never let me become so full, so complacent, so proud I forget that everything I have comes from Your hand. I never want to forget Your goodness to me. 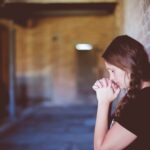 The Story of Two Deserter