“And they fear exceedingly, and said one to another, What manner of men is this, that even the wind and the sea obey him?”  (Mark 4:41 in the King James Version of the Holy Bible)

We live 80 miles from the Atlantic Ocean.  Hurricanes threaten us each year.  This year it looked like Irma was headed our way.  For unknown reasons, the storm turned away from us.

While visiting a lady in the hospital someone asked me about the impending storm.  I looked at the questioning man and said God was the only one who controlled the storm.  I’ve learned that if God is in the middle of every storm then I don’t have to worry, He can handle it!  It was a major revelation for me.  I don’t like wind, lightning and thunder but what a comfort to know that God is in it all.

The disciples were no different than I am.  The scriptures says that “they fear exceedingly.”  Jesus was sleeping so they woke Him up to do something.  He only spoke three words, “Peace be still,” and the storm ceased.  They were astonished at such power because He appeared to be just like them.  They were in awe.

Next time a storm arises in your life, look for Jesus in whatever you’re going through.  I promise you that He’s in the middle of your storm.

Prayer:  The storms of life are raging around me but I am so glad I know the producer and controller of every storm. I am sheltered in His arms.  Amen! 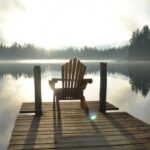 Enjoying the Journey of Life

It’s Not Over Until God Says It’s Over

What God Has Given Us