We have frequent afternoon showers in the South that interrupt our schedules. Many times these inconvenient downpours will start as we are heading home from work.

There are things in all of our lives that disrupt our plans and often cause us to change our plans. An unexpected illness and loss of a job are a few of the unexpected mud puddles we may encounter.

This week I stopped by an herb store. It had rained earlier and as I started to step out of the car I realized there was a huge mud puddle at my door. I ended up moving my car to avoid the mud puddle. But, the Bible reminds us that some “mud puddle interruptions” are welcome disruptions that open doors to miracles. For example, the story of a blind man in the Book of John who received his sight after Jesus spit on the ground and made a mud pack for his eyes. He was told to go to the Pool of Siloam and wash the mud out of his eyes.

“When he had thus spoken, he spat on the ground, and made clay of the spittle, and he anointed the eyes of the blind man with the clay” (John 9:7 in the King James Version of the Holy Bible).

Prayer: Even though the unexpected things that come into my life are often like a mud puddle I would rather avoid, help me, Lord, to realize both the ground and the rain came from You. You know how to turn the mud puddles I encounter into miracles. 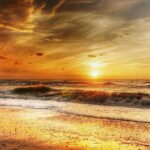