This week in our devotions we have journeyed with Jesus and His disciples from Bethany to Jerusalem, and on to Gethsemane. Now we stand at the foot of the cross at Golgotha.

One of the most heartbreaking scenes of the crucifixion of Jesus is described in John 19. No mother should have to endure the agony of losing a child, but Mary stood by the side of her son’s cross and watched as He was crucified. Standing there that fateful day, did she remember the prophecy of Simeon as he cradled the baby Jesus in his arms those many years ago?

“This child is destined to cause many in Israel to fall, but he will be a joy to many others. He has been sent as a sign from God, but many will oppose him. As a result, the deepest thoughts of many hearts will be revealed. And a sword will pierce your very soul.” (Luke 2:34-35, NLT)

Yes, it felt like a sword pierced her soul that day as she watched Him suffer and die.

Crucifixion was a brutal, inhumane way to die. Although the practice began hundreds of years before the Romans, they “perfected” this wicked practice. It was considered a very shameful way to die and was usually reserved for slaves, disgraced soldiers, Christians, foreigners, and political activists. Victims of crucifixion were first stripped naked and scourged. Then they were taunted and forced to carry the crossbar of the cross to the crucifixion site. Death could take from three hours up to four days. Then, unless the body was claimed by the family for burial, it was left to hang for predatory animals or birds to devour. There was nothing beautiful about the cross. It was a scene no mother should have to watch.

Although many were present that day, most remained at a distance. A few are mentioned as being near the cross. John, the beloved friend of the Lord, was the only disciple mentioned by name as being near. Scripture is silent about the remaining ten.

One of the final acts of Jesus before He breathed His last was to make provision for the care of His mother. This was the responsibility of the oldest son in the family. Although the Bible does not explicitly state so, we assume Joseph had died in the intervening years. Jesus did have half-siblings, but at that time they did not understand Jesus’ mission or believe in Him (John 7:5). Jesus entrusted His mother to His close friend, John, who took her into his own home and cared for her from that time forward.

Yes, when we look at the cross, we see an instrument of cruelty and torture. But more than that, we see it as the greatest symbol of love that ever existed. Love motivated every action of the Lord Jesus. In the garden, He prayed, “Not my will,” and He meant it. He willingly took our place. Musician and author Michael Card asked, “Why did they nail His feet and hands, when His love would have held Him there?”

Don’t stand back among the crowd. Meet Him at the foot of the cross. There will always be room for you there. 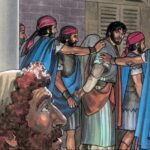