“After this, Joseph of Arimathea, being a disciple of Jesus, but secretly, for fear of the Jews, asked Pilate that he might take away the body of Jesus; and Pilate gave him permission. So he came and took the body of Jesus. And Nicodemus, who at first came to Jesus by night, also came, bringing a mixture of myrrh and aloes, about a hundred pounds.” (John 19:38-39, NKJV)

It was over. Or at least to the crowds who had gathered at Golgotha that day, it seemed so. The One many considered a prophet, a teacher, perhaps even the long-awaited Messiah, was dead. It had been an exhausting, emotional day. Even the elements added to the unfolding drama with darkness descending in the middle of the day and an earthquake breaking open graves. As it grew late, the Jewish leaders were anxious for the bodies to be removed before Passover began.

Since it was the day of Preparation, and so that the bodies would not remain on the cross on the Sabbath (for that Sabbath was a high day), the Jews asked Pilate that their legs might be broken and that they might be taken away . . . But when they came to Jesus and saw that he was already dead, they did not break his legs. But one of the soldiers pierced his side with a spear, and at once there came out blood and water. (John 19:31, 33-34, ESV)

Joseph of Arimathea and Nicodemus were wealthy, influential Jewish leaders and members of the Sanhedrin. Both were also secret disciples of Jesus. The Bible gives little information on the two men. Joseph is described as a good man who was waiting for the kingdom of God (Mark 15:43). Nicodemus was the one who came to inquire of Jesus by night (John 3:1-21).

When Jesus died on the cross, Joseph “taking courage, went in to Pilate and asked for the body of Jesus” (Mark 15:43, NKJV). Although Joseph was not a relative and had no right to make this request, Pilate granted him permission. Then Joseph and Nicodemus wrapped the body in a linen cloth along with special spices used for burial. They then placed the Lord’s body in Joseph’s own new tomb nearby.

Both men risked their position and their reputation by doing this. Even if other members of the council had suspected their belief in Jesus, this action would remove all doubt. Yet, these two good men were willing to step forward regardless of the consequences.

Sometimes doing the right thing, the honorable thing, may require us to go against the opinions and advice of friends, business associates, or even our own family. We can take the easy path, allowing others to pressure us but compromising our integrity. Or we can step forward, difficult as it may be, to do what is just and right. Joseph of Arimathea and Nicodemus chose to do the right thing. They could not condone what the religious leaders had done to Jesus.

The time may come when you will also face a difficult choice. Keep your integrity, even if it means others will not understand or will scorn your decision. But still do the right thing. 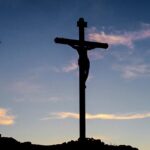 Standing by the Cross