Not lagging in diligence, fervent in spirit, serving the Lord. (Romans 12:11, NKJV)

When a friend began his first job in a small family restaurant, the owner, who was training him, gave some wise words of instruction. “If you keep the corners clean, the middle will take care of itself.” My friend learned this lesson as a teen, and the advice has served him well in all areas of his life since.

This Corner Philosophy is one we would all do well adopt. How many times have we ignored a little “corner,” something we could easily fix in just moments, until it grew into a much bigger situation? Then it requires more time and effort—and often money—to put it right. Whether something as simple as taming the clutter on the kitchen counter (my downfall) or the more difficult task of mending a broken relationship, the earlier we address it, the easier the fix. Ignoring the dust and dirt in the corner will not make it go away. Eventually it will encroach on the middle as well.

The Corner Philosophy has much larger implications as well. Whether in our homes, on the job, in our city, or even our nation, we must not disregard the small things. Keeping the center of the room, the area most visible, clean but disregarding the corners will bring consequences. While hardly noticeable at first, soon the things we ignore will set off a progression of bigger events.

A friend literally overlooked the corners of her house until she no longer knew where to start. As the clutter grew out of control, she stopped allowing anyone to visit. (I was never allowed inside.) First, little things fell into disrepair, and then larger things broke. Her water lines leaked, causing damage, and the heating system stopped working. I suspected she had not changed the filter, a simple enough task, until it eventually blocked the airflow. The corners were symptomatic of more serious problems that she never addressed, and soon her entire life was in disarray.

It is not just ignoring our physical surroundings that will cause us difficulty. We can also ignore the corners of our soul. If we take no notice of small behaviors, they soon become deep-seated habits. We may not have noticed how quickly the dirt from the corner—an attitude, a thought, an action–soon filled more and more space in our life. Now we must diligently work to overcome what was once only a small thing.

Song of Solomon 2:15 speaks of “little foxes that spoil the vines.” People may say, “Don’t sweat the small stuff,” but when left unattended, “small stuff” becomes our downfall. Get out the broom. It’s time to sweep the corners and take care of the little things before they become big things.

Lord, help me to be diligent to keep not only my physical house swept and clean but also my spiritual house. Show me any areas that need attention before they become a serious problem. Help me stay on guard to remove any bits of “dust and dirt” before they become hard to break attitudes and habits. 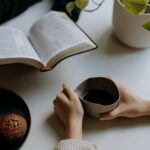 I’ve Got a Story to Tell 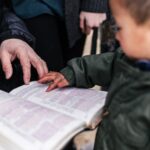 The Pause for the Him Possible: Step it Up