“And when Herod would have brought him forth, the same night Peter was sleeping between two soldiers, bound with two chains: and the keepers before the door kept the prison. And, behold, the angel of the Lord came upon him, and a light shined in the prison: and he smote Peter on the side, and raised him up, saying, Arise up quickly. And his chains fell off from his hands. And the angel said unto him, Gird thyself, and bind on thy sandals. And so he did. And he saith unto him, Cast thy garment about thee, and follow me.” Acts 12:6-8.

Picture the apostle Peter, sleeping between two soldiers, chains holding him in position.  It is hard to believe that he could sleep, knowing that unless the Lord intervened, he would probably face death in the morning. But somehow, he slept.

Can you just imagine how Peter felt as a light suddenly shone in the cell, and something poked him in the side?  We wonder why the angel didn’t just pick him up quietly and carry him out of the prison.  For some strange reason, the soldiers slept on and were not disturbed.

The angel told him to rise up quickly, and as he did so the chains fell from his hands. Then he was told to put on his garment and his sandals and to don his cloak and follow the angel. As Peter obeyed the angel, the prison doors opened and he found himself out on the street, thinking he had seen a vision.  He realized that he had been delivered. But he had to take the first steps and obey what the angel told him.

We may not be in a physical prison like Peter, but sometimes we may feel that the enemy has us bound, perhaps by fear, self-pity, or by just the normal circumstances that we face in life. As we cry out to the Lord, He is there and will show us what to do.

Whatever circumstance you may find yourself in today, reach out to the Lord, tell him the problem, then rest in Him, until He gives you the instructions you need to follow. Then, just obey His voice, take the first step and trust Him.

Prayer:  Thank you Jesus, that you see everything that we are facing in our lives today, and you have already gone before us preparing the way.  Help us to listen for your voice and obey what you show us to do. 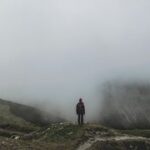