“Go your way into the village over against you: and as soon as ye be entered into it, ye shall find a colt tied, whereon never man sat; loose him, and bring him. And if any man say unto you, Why do ye this? say ye that the Lord hath need of him; and straightway he will send him hither.” Mark 11:2-3

This story in the Bible has always intrigued me.  Can you imagine just going into someone’s yard, untying their donkey, and leading him off?  I am sure that the owner was astonished and wanted to know what they thought they were doing.  But apparently when told the Lord needed him, they realized that it was Jesus.  And so, they let the donkey go, willingly.

What a glorious sight it must have been!  Just picture it as one of the disciples laid his cloak over the donkey’s back and assisted Jesus to mount.  The excited crowd began to cut down palm branches and wave them.  Many took off their garments and laid them on the roadway.  Whispers began to arise within the crowd that this must be their Messiah coming to bring them deliverance, defeat the Romans, and rule as their King.  They began to shout:

It is hard to believe that many that followed Jesus as He rode the donkey into Jerusalem that day, would be in the crowd later in the week, who would stand outside Pilate’s hall and call for Jesus to be crucified. As Jesus looked at them day, He knew what was going to transpire in just a few days and that only a faithful few would stand by Him. Human nature can be very changeable, willing to go along with the crowd.

I know this year is different, and many of us will not be able to be in a church building to worship, but I hope that each one of you will find a livestream to listen to and celebrate this Palm Sunday, Easter, and every Sunday.

Just as Jesus had need of the donkey on which to make His entry into Jerusalem, He is seeking today for those who will willingly go with Him, through the joyous times and through the hard times. I trust that you are trusting Him to save you and keep you and make you ready for His coming.

Prayer:  Thank you Jesus, that you made the supreme sacrifice for us, gave your life that we might have life, and rose again to give us hope.  We thank you for the Easter message, help us to be faithful to you every day.

A Message of Thanks 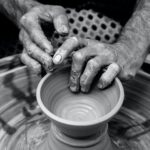