“The angel of the Lord appeared to him and said, Mighty hero, the Lord is with you!” (Judges 6:12 in the New Living Translation of the Bible)

God really does have a sense of humor doesn’t He? When He went to see Gideon, He called him “Mighty hero” and that was before GIdeon showed his skill in battle or rescued anyone. In verse 15, Gideon let God know that he was not qualified so how on earth could he save Israel. He came from the poorest in the neighborhood and he was the least in his father’s house.

Sound familiar? Often I have felt like God must have got names mixed up when He asked me to do something for Him. Like Gideon, I’ve said, “I’m not qualified, find somebody else.”

God saw something heroic in Gideon that he didn’t know he had. God qualified him and He will do the same for you my dear sister. You are more than meets the eye. Remember, with God you can do anything!

Read on to the end of the chapter and see how God used Gideon (the  unqualified) to destroy the altars of Baal at night.

Prayer:  Thank You, Lord, for choosing me to work in Your Kingdom. What an honor it is!  I am unworthy and unqualified but You made me worthy and qualified me to do what You ask of me.  Amen! 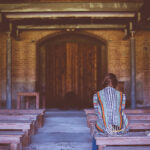 Step Out of The Traffic