“Go, gather together all the Jews that are present in Shushan, and fast ye for me, and neither eat nor drink three days, night or day.  I also, and my maidens will fast likewise, and so will I go in unto the king, which is not according to the law:  and if I perish, I perish”  (Esther 4:16 KJV). 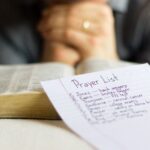 The story of Esther is a story of a young lady with courage.  Her uncle, Mordecai, had raised her after her parents died.  She trusted him as he had guided her in the past.  He sent word to her of what was happening outside the palace.  Haman was plotting to kill the Jews.  The pressure was on and time was of the essence.

You know the story well, I’m sure.  Esther did a very courageous thing when she went before the king to make her petition known.  But she didn’t go alone.  She asked Mordecai to have all the Jews fast and pray along with her before she went.

After praying and fasting, Esther made her decision and said, “If I perish, I perish.”  With courage she took her stand and the rest is history!  The fast turned into a feast.

Prayer and fasting still works today when the pressure is on.  Find someone to believe with you about your own situation and see what God will do!

Prayer:  Lord, I need help that only comes from You.  Give me the courage to stand regardless!  Others are depending on me to make a courageous decision.  Amen!

The Mathematics of Life

It’s a Fight to the Finish!

Courage for the Assignment