“And David inquired of God, saying, Shall I go up against the Philistines?” (I Chronicles 14:10).

While recently chatting with a friend about this and that, she made the comment, “So, I prayed about what I should do.” I hate to admit it, but I immediately thought, “Why would she bother to pray about something as simple as that?” Then I realized how off my attitude was. Are we only supposed to pray about the “big stuff”? If so, how do we know what the big stuff really is? Sometimes the smallest decision may ultimately have tremendous impact on our lives. Philippians 4:6 tells us, “Don’t worry about anything; instead, pray about everything” (New Living Translation). Everything!

In I Chronicles 14, King David had an important decision to make. Should they go up against the Philistines? Would God be with the Israelites in this endeavor? He immediately knew how to make the best decision. He inquired of God (verse 10). Before he went out to battle, he wanted assurance God was going to be in this with them. And because he took time to ask, God took time to tell him the right course of action. It seems so simple, doesn’t it? Ask God first.

David’s predecessor, King Saul, did not take time to inquire of the Lord and the Bible tells us this literally became a fatal error. “So Saul died for his breach of faith. He broke faith with the LORD in that he did not keep the command of the LORD, and also consulted a medium, seeking guidance. He did not seek guidance from the LORD. Therefore the LORD put him to death and turned the kingdom over to David the son of Jesse” (I Chronicles 10:13-14, English Standard Version).

Every day we encounter decisions, some “big stuff” and some seemingly “small stuff.” When we think about it, it’s pretty amazing that the God of the entire universe wants to help us with these decisions. He is interested in what happens to us and wants only the best for us. But first we need to include Him in the decision process. James 4:15 tells us, “Instead you ought to say, ‘If the Lord wills, we will live and do this or that’” (ESV).

Prayer: Lord, help me each day to include You in the decisions in my life. Help me to lean on Your wisdom at all times. Thank You that You care for me and want to see me succeed in all I do. Remind me to always seek You first and follow Your will and way. 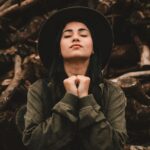 He Knows My Name!