“By faith Noah, being warned of God of things not seen as yet, moved with fear, prepared an ark to the saving of his house; by the which he condemned the world, and became heir of the righteousness which is by faith.” Hebrews 11:7 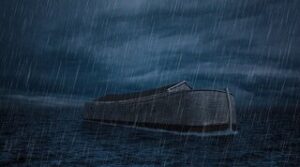 As I write this, we are getting a thunderstorm. The sky is dark, the wind is blowing, and it is raining hard. Rain is familiar to us, and we take it for granted as we know plants must grow and flourish.

BUT there was a time at the beginning of our world when there was no rain. God provided for a mist to rise and water the earth. So, we can imagine how Noah must have felt when God appeared to him with a strange request – to build a boat. It was not just to be a small boat to get him across a lake or pond. No, it was to be a huge boat that would hold many animals and people. God said he was tired of the wickedness in the world and was going to destroy it with a flood. Noah and his family would be spared if they obeyed His directions.

Noah must have been full of questions. What is rain? What do I know about building boats? But God gave him the wisdom and understanding that he needed, and he started building. No doubt, people gathered around and asked him what he was doing and why. As he worked, he told them judgment was coming and they needed to repent and prepare.

God had asked a strange thing of Noah, but he was willing to obey the Lord and do what he had been asked to do. The verse in Hebrews tells us he did it for the saving of his household. As long as the door was open, others could have entered, but we know that when God shut the door, only Noah and his family were safe inside with the animals.

This week we will look at some people in the Bible who received strange requests from the Lord and how they responded to them. They are all examples for us to follow in our walk of faith. God may ask us to do something that we don’t understand, and we must be willing to obey. We may have questions, but if we step out in faith, the Lord will lead us and guide us, and everything will work out according to His plan.

Prayer: Jesus, we thank you for the examples of extreme faith in you that you have recorded in your Word. We ask that you help us to be open to what you would have us do each day and that we would be willing to obey whatever you ask of us.

You Are A Priceless, Golden Vessel