Child, why aren’t you normal like the other kids playing all around? Why don’t you act normal? What is wrong with him? Why does he look, act, and sound that way?

However, God made your child special just the way they are, and it doesn’t matter what others may think. Your child has a unique gift; they are a perfect creation of Christ to show the world that God loves them and makes no mistakes.

Our twin girls, sixteen months older than our son, developed a rare twin language when Ezra was young, which caused him to develop a speech abnormality. I noticed something was wrong when he wouldn’t say “mama” or “daddy.” He didn’t say much at all; he was very quiet. I was concerned. People often asked me, “What’s wrong with him?” I was shocked by their question and replied, “He’s just being a kid.” I didn’t feel I had to give them a reason for why my child acts the way he does. So, I ignored the looks, whispers, and shaking of heads; as hard as it was, I ignored them all. I love this child just the way he is; he is perfect in the eyes of God. I don’t care what others may say; this child is perfect just the way he is.

When Ezra was eighteen-months-old, I noticed his words didn’t make sense. He often pointed to things and made a little noise that I was unfamiliar with. I told my husband I was worried about our son’s speech. His patient response was, “He’s only eighteen months old; give him some time,” but I knew something was wrong. When Ezra turned two years old, he still wasn’t saying, “mama,” so I took him to a pediatrician. He was tested and sent to a speech-language pathologist who identified Ezra’s speech abnormality.

“And the peace of God, which passeth all understanding, shall keep your hearts and minds through Christ Jesus.”

When I heard the words “speech abnormality,” I blamed myself; what did I do wrong? Did I not eat the right things when I was pregnant with him? Did I not take the right vitamins? I put a lot of pressure on myself because my boy, who should be an average two-year-old, had difficulty communicating what he needed. Guilt weighed heavily upon my shoulders. However, I did not give up on Ezra, and I will never give up on him, despite what others may say or think.

When our twin girls started to speak autonomous languages—a rare twin language that exists in about 40 percent of all twins, our son started to learn it and developed a speech disability. Because of it, Ezra had to relearn the English language and the syllables that go with it.

The difficulties of communicating with a child who has special needs can make life more challenging. I would often beat myself up about what I could have done differently, but God kept reassuring me that I did nothing wrong.

It got to a point where I would get angry with Ezra for not talking as I thought he should. In frustration, I would say, “Why can’t you just be normal!” Then I would look at his beautiful brown eyes and auburn hair, and my heart would break. He couldn’t help the fact that he was struggling. I would scoop up my little boy in my arms and say, “I’m sorry, mommy is sorry. I love you, just the way you are.” He would look at me in confusion, wondering why I was crying. And I would say, “You’re going to be a great man of God one day.” I hugged him, kissed him, and he went on playing with his sisters.

I berated myself for those moments of exasperation. Ezra is a “normal,” healthy, beautiful little boy, and I could not understand why I was taking my frustration out on him. In my mind, I knew he had a hard time communicating, and it wasn’t his fault, but it was a difficult emotional situation.

Mothers can be hard on themselves. We feel responsible if our kids don’t do well in school or have bad manners or if others criticize our parenting. We may feel like the worst mom in the world, but we’re doing our best to raise Godly kids who will give the Lord the glory He deserves.

“The Lord will fight for you; you need only to be still.”

As the years progressed, it got increasingly difficult. Ezra was getting speech therapy and doing well, but it worsened when he started kindergarten.

Because of his speech abnormality, attending school generated a multitude of issues. Ezra had some emotional problems when he couldn’t express himself as he wanted. The school tried to classify him as being delayed or behind. No matter how many times we told them it was a speech issue, they wouldn’t listen. Ezra is a smart, sweet, and loving little boy. When someone labels your child, it adds to your stress, and you develop a lot of guilt, as I did. A Bible verse that kept me going was:

“There is therefore now no condemnation to them which are in Christ Jesus, who walk not after the flesh, but after the Spirit.”

Ultimately, we decided to homeschool Ezra, and he’s doing great!

I’m telling my story because you might be a mother of a child with severe disabilities. You may blame yourself. When you go to the park or any public place, others may look at him, shake their head, or ask you, “What’s wrong with him?” You’re not alone, and there’s much to be thankful for; God gave you this child for a reason, and He knew you could handle it better than most.

Note the following examples of people in the Bible with disabilities whom God used or healed:

God used these people as our examples because He saw their faith. God called you to be a mom of a special needs child; it’s a blessing even when it feels heavy. You bless your child, so don’t ever take it for granted. You are your child’s best advocate!

Rebbecca Horner lives in Utah with her husband of eleven years and her four kids. Her family attends New Life Center in Salt Lake City, Utah, pastored by Eugene Guerrero. She serves in the music ministry and her husband, Mathew, is the men’s ministries leader.

Even When I Don’t See It You’re Working 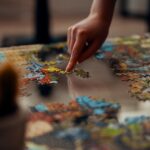 The Puzzle of Life

One Day or Day One? You Decide.