I grew up in Missouri, USA, where our state motto is “Show Me.” Often when people tell us something, we Missourians will joke, “Show me!” In other words, we want proof that it’s true.

I’d love for God to give me clear evidence that things are going to be alright, wouldn’t you? It would be much more comfortable. He doesn’t often work that way, though. Even when Jesus lived and walked among us, He spoke to the multitudes in parables “so that ‘seeing they may see and not perceive, and hearing they may hear and not understand” (Mark 4:12).

While pursuing my master’s degree at university, I had to learn about the brain. An interesting condition called “visual field deficit” can occur when the brain’s visual pathway is damaged, causing a person to be unable to see certain areas of their visual field. The person may not even be aware of it. I’ll share an example I encountered during my training. One of my clients was an elderly woman who’d had a stroke that resulted in a right visual field deficit. Since she was unable to perceive anything on her right side, she was only eating the food on the left side of her plate. In therapy, then, one of our goals was to teach her to slightly turn her plate after every few bites. By learning to change her environment (repeatedly turning her plate) and thus her perspective, she was able to see and eat what was already there.

From a spiritual point of view, I am reminded that just because we can’t see something doesn’t mean it isn’t there. Consider Hagar and Ishmael, whom Abraham had sent away with bread and water. Eventually, their personal supply of water had been used up. When Hagar realized the gravity of their situation, indeed death was a very real and imminent probability, she put Ishmael under a shrub and walked just far enough away that she wouldn’t have to watch her son die.

Then she sat down, lifted her voice, and wept. But the well, with its life-sustaining water, was already there. God heard their cries, opened Hagar’s eyes, and she saw it (Genesis 21:19). Life and purpose wouldn’t end in the desert. He would make of Ishmael, too, a great nation.

So, I pray for us what the disciples asked for themselves in Matthew 20:33, “Lord, that our eyes may be opened.” Yes, Lord, open our eyes to see from Your perspective; let us walk confidently in the darkest situations, knowing that even when we don’t see it, You’re working.

Note: This devotional was originally published in the Ladies Prayer International newsletter. Sign-up for the newsletter today.

Vercinia Bailey Reed and her husband, Brad, serve as AIMers in the United Arab Emirates where they pastor Abundant Life Church in Abu Dhabi and Dubai. They have two children, Jaden and Elias. Vercinia has a BHS and MHS in Communication Sciences & Disorders and worked as a speech-language pathologist prior to moving to the UAE in 2003.

Waiting in the Obscured Path 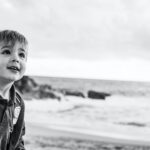