When Pharaoh heard of it, he sought to kill Moses. But Moses fled from Pharaoh and stayed in the land of Midian. And he sat down by a well. (Exodus 2:15, ESV)

Now when forty years had passed, an angel appeared to him in the wilderness of Mount Sinai, in a flame of fire in a bush. (Acts 7:30, ESV)

The life of Moses is an interesting study. Born to Israelite slaves, hidden in a basket in the river, adopted by Pharaoh’s daughter and raised in the palace, given an excellent Egyptian education. It’s a true “rags to riches” tale—until the day he ran for his life and hid in the desert for the next forty years. Moses suddenly went from a prince to a fugitive nobody. From sitting in the palace to sitting in the desert by a well.

Sitting on the Sidelines

God left Moses sitting on the sidelines for forty long years. Or did He?

What was really going on between the time Moses fled Egypt and when he returned forty years later? Were his days just sand and sheep? Or was God using this time to develop a strength of character that would enable him to lead two million people to freedom?

Moses knew God had chosen him to deliver his Hebrew family from Egyptian bondage, but his first attempt to intercede was unsuccessful. In trying to stop the harsh treatment of one of the Hebrew slaves, he killed an Egyptian. He was misunderstood and suddenly fleeing for his life.

“He supposed that his brothers would understand that God was giving them salvation by his hand, but they did not understand” (Acts 7:25, ESV).

Although chosen by God to deliver the Israelites, Moses could not do this from his position in the palace. How could a slave relate to someone of his status as their deliverer? It was not yet time. God had more to teach him, and the desert became his classroom. During his years in Midian, he learned about life in the desert, something he would one day need and something vastly different from his first forty years. But God also used those years to develop qualities within him that would serve him well when the time of deliverance came.

Sitting in the Desert

Most of us can probably say we’ve enjoyed times “in the palace,” when life is good. When life goes smoothly, we feel blessed by God and we are. But the “desert times” are harder to understand. Did God lift His blessings off my life? Why is this happening to me? I thought God had a special plan for my life. Was I wrong? Perhaps God is using the desert to prepare us for even greater things, but first we have lessons to learn. These lessons will make us stronger and give us the knowledge we need to complete God’s plan for us.

Forty years? Yes, the preparation time for Moses was long, but God’s timing is often different from what we expect. Don’t rebel against the desert experience. Learn from it. God is preparing you for the calling He has placed upon your life. Trust His timing.

Prayer: Lord, I don’t always understand the things that come my way. I feel the isolation, the barrenness, the loneliness in this desert place; but I trust You. You are refining me, teaching me, and preparing me. Help me to be patient and open my heart to the things You want to develop in my life. Use this time in the desert for Your glory. 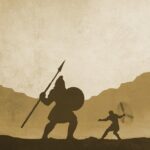