“Stand therefore, having fastened on the belt of truth, and having put on the breastplate of righteousness.” (Ephesians 6:14, ESV)

Spam. Scam. Fake. Fraud. If you are like me, you are irritated by those who prey on the unsuspecting and vulnerable, scheming to dupe or cheat them. I became so irritated at the number of spam phone calls I received that I finally activated a setting on my phone to screen out any callers not on my contact list. I do miss a few legitimate calls, but usually those who really need me just leave a message. Life became more peaceful after that.

I dislike frauds or tricksters. Most of us do. They try to steal our identity, threaten “legal action” on fake bills, or claim a friend or loved one needs bailed out of a dire situation. They are creative in their stories, but their goal is to deceive us in some way. How sad that I must constantly be on guard so someone cannot harm me by their or schemes.

It’s even more distressing when falsehoods affect my eternal destiny by distorting the Word of God. The Bible identifies Satan as the father of lies and deceit (John 8:44). It’s nothing new; he’s been spreading his untruths since the beginning of time.

Even within the early church, false teachers soon appeared. Paul warned in II Timothy 2:16-18, “But avoid irreverent babble, for it will lead people into more and more ungodliness, and their talk will spread like gangrene. Among them are Hymenaeus and Philetus, who have swerved from the truth, saying that the resurrection has already happened. They are upsetting the faith of some” (ESV).

Is there a way to counteract these spiritual scammers?

Many today are not interested in preserving truth. They would rather hear things that validate their own personal beliefs rather than adhering to the Word of God. Paul warns of this in II Timothy 4:3.

“For the time is coming when people will not endure sound teaching, but having itching ears they will accumulate for themselves teachers to suit their own passions” (ESV).

We are living in the end time. Let us fasten on the belt of truth, always on guard so we do not fall prey to spiritual scammers. Our souls are at stake. 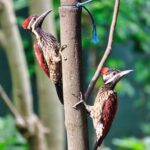