Thus shall you speak to Hezekiah king of Judah: ‘Do not let your God in whom you trust deceive you by promising that Jerusalem will not be given into the hand of the king of Assyria’ . . . Hezekiah received the letter from the hand of the messengers, and read it; and Hezekiah went up to the house of the LORD, and spread it before the LORD. (Isaiah 37:10, 14, ESV)

Hezekiah, king of Judah, was one of the “good kings.” Second Chronicles 31: 20 says “he did what was good and right and faithful before the LORD his God” (ESV). That could not be said about many of Judah’s kings, including Hezekiah’s own father, Ahaz, who was a very wicked ruler. Although his father was a poor role model, II Kings 18:5-7 tells us that God was with Hezekiah because he “he held fast to the LORD” and “the LORD was with him; wherever he went out, he prospered.” (Yes, you can also live a life pleasing to God even if you did not have a good example at home.)

When Hezekiah ascended the throne, he cleaned house—literally. He destroyed the pagan idols, altars, and temples. Ahaz had nailed the doors shut of the Temple, but Hezekiah reopened and cleaned the Temple, restored the priesthood, and led the country to revival. He brought the country back from idolatry to worshiping the One True God. When trouble came—and doesn’t it always—Hezekiah already had a relationship with God that sustained him. (Good advice for all of us.)

Trouble came in the form of King Sennacherib and 185,000 soldiers of the Assyrian army. The Assyrians had already conquered several countries, including the Northern Kingdom of Israel. When their troops marched against Jerusalem, mocking their God, and boasting of their coming victory, Hezekiah knew exactly where to take his problem.

Hezekiah received the letter from the hand of the messengers, and read it; and Hezekiah went up to the house of the LORD, and spread it before the LORD. (Isaiah 37:14, ESV)

What do you do when trouble comes and the enemy whispers that your God is powerless? When he tries to convince you that you are facing the battle alone and will be defeated. Don’t listen to his voice. Make your way to the Lord and lay your problem before Him.

So the LORD saved Hezekiah and the inhabitants of Jerusalem from the hand of Sennacherib king of Assyria and from the hand of all his enemies, and he provided for them on every side. (II Chronicles 32:22, ESV).

Just like in the days of Hezekiah, the battle is not ours to fight. Lay the problem before the Lord and trust Him to bring the victory.

Remind me, Lord, that I’m not in this fight alone. You are not a powerless God as the enemy would like me to think. I bring my problem to You and lay it before You now. The victory is Yours. 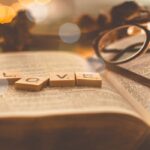 The Value of Love

The Word is Alive